In the summer of 2020, Johnny Archibald was a senior in college, preparing for his last year at Rochester Institute of Technology in New York. He received a call from a recruiter at a high-profile tech company, based in California, about an engineering internship. Although skeptical at first, doubting the outcome, he continued through the interview process and ended up getting the engineering internship. He was to relocate to California, from New Hampshire, in August 2020. For a few weeks, before moving from the East Coast, he felt a bit off but dismissed his symptoms, as it was typical for him to have a viral infection each summer around this time. He was already on prednisone because of a bad poison ivy exposure that went systemic and assumed all would run it’s course. “My last day taking prednisone was the day before I flew to California with two suitcases and a backpack,” he recalls.

Johnny flew out of Boston and during the six-hour flight things were getting worse: most of the flight he held his head in his hands and he felt “out of it.” He experienced shortness of breath and took multiple trips to the bathroom to splash water on his face to try and feel better. His breathing continued to get worse. After landing at San Francisco International Airport, he picked up his rental car and drove quickly to get some Gatorade and water. He drove 45 minutes to his extended stay, brought his backpack into the room, drank as much fluids as he could to rehydrate, and fell asleep. When he woke up the next morning his gums were puffed up badly and his breathing was no better. After consulting Google with his symptoms, he went to Washington Hospital in Fremont, California. He sat in the ER for four hours before he was seen, since his symptoms did not appear life-threatening, where they took his vitals and a COVID-19 test that was negative. After another four hours, they drew his blood, and by this time his cell phone battery had died. John vividly remembers, “the nurse came back in and flat out told me I had leukemia.”

He thought to himself, “I am 22 years old. From New Hampshire, in California, and all by myself. I thought I was going to die.”

John knew very little about leukemia. He knew his grandfather had it and that it is a blood disease, cancer of the blood. John’s grandfather passed away from a stroke that was a complication caused by leukemia. “The nurse let me use her phone to call my parents. I was in a serious motorcycle accident two years prior, so I knew this news would be hard on my parents. I had moved to New York, Pennsylvania and other places throughout the country for school and other internships, but told my parents I wanted to do this California internship on my own.” John did make the trip alone but, after this diagnosis was delivered to his parents, his mother Gail assured him she would be on the next flight out, and she was. Gail was in disbelief when she got the call. She recalls the nurse came on the phone and said, “Gail, there is no question that he has leukemia and we’re going to be airlifting him shortly.” Right after that call, the medical team sedated John and airlifted him across the San Francisco Bay to UCSF Benioff Children’s Hospital where he would receive treatment. 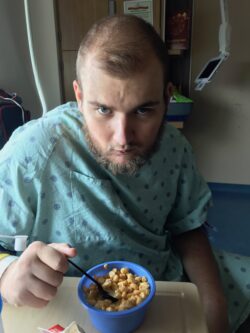 John in the beginning of his chemotherapy.

John’s parents, Gail and Gary, remember feeling “automatically enveloped in a bubble of disbelief, where it was safe, while you try and hold it together.” 12 hours later Gail was on the first flight out of Boston.

“Once I got there I saw Dr. Betsy Young and had to sign my life away for the chemo treatment,” John said. “It took her 30 minutes to tell me all the potential side effects and that it was UCSF’s first emergency chemotherapy in a decade.” It was not until later that John realized that he was really sick. His white cell blood count was 260,000—normal levels are usually between 4,500 to 11,000 WBCs per microliter, according to UCSF Health.  “My blood was ‘basically sludge’, they said.” It was a mystery as to why John was still alive but no doubt he was rapidly declining. When Gail arrived, John was in the PICU and the first thing he said to her was, “I don’t want to die.”

“You think you have gotten past falling apart, but I find, even as I get further away from it, when you look back, it’s very dark.” Gail recounted recently. “I spent the afternoon with him in the PICU and, listening to the weekend team, they didn’t know anything yet and needed to run tests to understand what kind of leukemia he had. Sitting in a small dark room with him, trying to process everything being thrown at us—you can’t prepare for that.”

The first nurse John remembers well is Ryan who was his chemo charge nurse throughout his six month stay in the hospital. “Ryan kept it real with me,” John shared recently. “I was in the pediatric intensive care unit and nurses there are used to talking with parents, not kids, and certainly not young adults like me. Ryan was not too much older than me and he told me like it was. It was honestly the most reassuring thing to me: someone being fully transparent with me about what was going on.” It was at that point, John felt, that he understood what he was up against, and that provided a certain sense of relief. 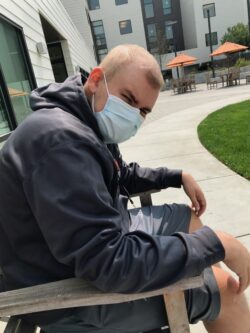 In between chemotherapy treatments, John stayed at Family House with his parents, and spent time outside in the courtyard. 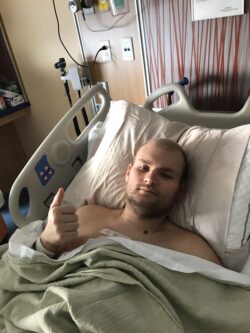 Last dose of chemotherapy in round four, on Christmas Eve 2020. 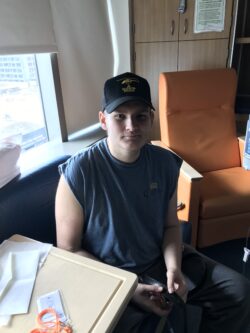 Waiting for discharge from UCSF Benioff Children’s Hospital after completing round four of his chemotherapy.

They didn’t know how bad John’s leukemia was, so for the next few weeks they didn’t know what his chances were, and John remembers being “in and out of it” quite a bit. Luckily, both of John’s parents work for themselves and they were able to switch off being with him in San Francisco throughout his entire treatment. “My parents went through it worse than I did. I had the best medicine, the best doctors in the world. If I needed to sleep that was taken care of; needed help with the pain: that was handled. While it sucked for me, I can’t imagine what it was like for my parents.” Thankfully, Gail and Gary didn’t have to worry about money or meals when it came to being there for their son. Family House was a short walk away and they were able to get connected through the social worker at UCSF Benioff Children’s Hospital within days of arriving in San Francisco. While Family House doesn’t typically house families other than those with patients under 18 years of age, they made an exception for the Archibald family. 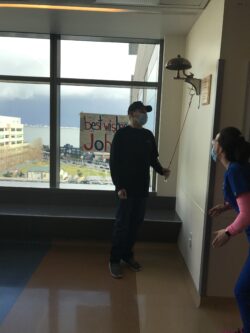 John is cancer-free and rings the bell at UCSF Benioff Children’s Hospital.

Due to the pandemic, the community connections at meal times and with activities have been halted for safety reasons, but Gail was still able to safely connect with Family House staff like Calvin, Janie, Sarah, Tyler, and Maria, along with another mom that had been staying at Family House for the past year. Gail would be at the hospital with John for 10-12 hours of the day, and remembers, “I could go ‘home’ to my little apartment at Family House and settle in, and just feel safe and protected and watched out for. Seriously I don’t know what I would have done.”

John’s story is a remarkable one of recovery and perseverance. He completed four rounds of chemotherapy at UCSF for acute myeloid leukemia over a six month period and was able to ring the bell to celebrate being cancer-free on January 24, 2021. An east coast pizza connoisseur, he tested as many pizza places in the city as he could, and even managed to take two online RIT classes. He will graduate from RIT in May 2021 with a degree in mechanical engineering and will be back in the Bay to complete that internship that was graciously deferred to when he could return. 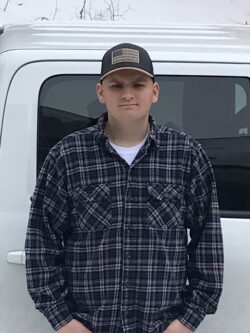 “It already feels like a lifetime ago. I like to think that I was lucky. And no parent should have to watch that, it was really hard on them. But all in all I like to think this was a happy story,” John noted. “[I] got very, very lucky with everything. There’s a lot of young kids that didn’t make it out of the hospital, and I did. Spent six months listening to kids cry and scream during treatment. Everyone was great at UCSF—some of the best doctors and nurses.”

“I’m just in awe of [Johnny],” Gail shared. “I’m blessed that I could be there, and that we could stay, and could see it through with Dr. Stieglitz, Dr. Marinoff, and the team of researchers, fellows, and nurses at UCSF. And truly if Family House hadn’t let me stay, I have no idea what the other side would have looked like. I don’t know that we would have been able to complete his treatment in San Francisco. I’m grateful I could be with him every step of the way.”

John turns 23 on March 24, 2021 and we’re so glad his happy story is one we could share with you all today. From all of us at Family House in San Francisco, we wish you a very happy birthday, Johnny!

Family House San Francisco is an independent non-profit organization led by a professional staff and board of directors dedicated to providing residential services free-of-charge to qualifying families. Since we receive no financial support from UCSF Benioff Children’s Hospital, or any other public entity, we rely solely on the generous contributions of individuals, corporations, and foundations.

Donate in Honor of Johnny