Zulu
Kayden Langley was born with Pelizaeus-Merzbacher Disease (PMD) an extremely rare disease in which the individual is born without a myelin sheath, the fat and protein covering–which acts as an insulator–on neural fibers in the central nervous system. This leaves the individual hypotonic, making it difficult to hold up their head, due to their low level of muscle development. Motor abilities for these individuals are delayed or never acquired. Muscle contractures or the shrinkage of muscle often occur over time and mental functions may deteriorate as well due to the disease. These side effects are just some of the listed symptoms connected to PMD. Currently there is no cure for this disease, nor a standard course of treatment. 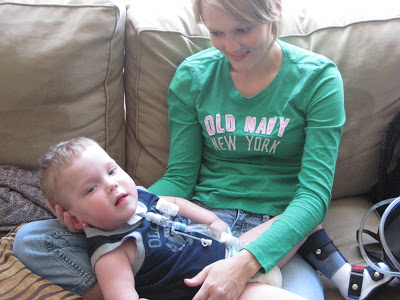 Though the prognosis may seem grimm, if there is anything we have learned here at Family House, it is that there is ALWAYS room for HOPE, and that sometimes miracles do happen. For the Langley Family that miracle came when Kayden was one of four boys to be accepted into a clinical trial for PMD. Jaime, Kayden’s mother remember’s the doctors first telling her their son had PMD. She said, “they told me it was more likely for us to win the lottery then have a child with PMD.” But the Langley’s never gave up hope, and went online throwing themselves into research about the disease. It was through their research that they came across the Clinical Trial here at UCSF. The trial is researching the use of Stem Cells to regrow the missing or damaged myelin sheath. Kayden and the three other boys are among the first humans ever to use Stem Cells for treatment.
The Langley’s have been here three times in the past year, and are schedule to come back three more times before Kayden’s treatments are done. As I sat in the family room with Kayden, Jaime and their nurse I began to understand what Family House really stands for. Jaime and her nurse were both shocked by how nice everyone here is. Jaime said, “You wouldn’t expect them to be so nice, to care so much. But they do, they are so nice here.” She talked about Family House as if it was more then just a place to stay, but a place to escape and forget about the endless hours of appointments and treatments. Jaime told me about all the places she’d gotten to visit around San Francisco, like the Science Museum, Fisherman’s Wharf, and the Golden Gate Bridge. She talked about how much her other two kids loved coming to Family House to spend time with the other families and staff. She feels comfortable here, she feels at home here.
Mother Teresa once said, “We can do no great things; only small things with great love.” As I looked on to Kayden and Jaime that day I realized for the first time what that quote really meant and how Family House makes it possible for all of our Families and Staff to do what we can with great love.
Privacy & Cookies: This site uses cookies. By continuing to use this website, you agree to their use. To find out more, including how to control cookies, see here: Privacy Policy
AcceptReject Read More
Privacy & Cookies Policy